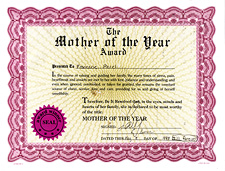 You may have been wondering where I had gone….. well, in a nutshell, I’ve been working very hard on earning myself the aforementioned award! Not only have I quit many bad habits in the last few weeks and changed many things about my lifestyle, taken three weeks off work to stay home with one sick child, spent the weekend sleeping in a CHAIR, yes a chair, in the hospital by the beside of another, the icing on the cake is the task I undertook earlier this evening.

Since the injection of Toddler Child into our lives, Middle Child has kind of fell to the wayside….. well, her interests have anyways. She had a hard time recently with being at home laid up for a couple of weeks and having nothing but her personal slave to attend to her needs and I figured with looming teenage-hood, she deserved a little “me” time….. that would be time with me that’s all about her with no one else interfering. Might I also take the opportunity to mention that this also means it is something that ME, MYSELF and I is probably not really that interested in at all. *violins playing softly*

And where are we exactly? Lined up and waiting to see Britain’s Got Talent. I was most disappointed to hear that this was NOT in fact a filmed performance where I could laugh at Hasslehoff and guffaw at Cowell but instead a road show of the best of 2011. How far behind am I? I didn’t even realise it had finished and they had picked a winner already. Middle Child laughs at this…. “God… you’re so uncool mum… Get a life!” Yes, thanks love, I know I don’t have a life….. I’d like to point out that I did have one before they sucked it out of me but I’m being nice and on my best behaviour….. it’s her night after all.

Now, I have to say, I’ve never been to one of these things before and I should have done my homework. I had no idea that there was some pre-teen heart-throb boy involved in all this. Did you know that?  The acts were all entertaining and a few even blow mind. More important than any of that though was the fact that Heart Throb boy who goes by the name of Ronan Parke, (link to you tube vid) looks like butter wouldn’t melt, SINGS!!!! Sings like a ROCKSTAR!!! Now he really was worth seeing…… HOWEVER…… 99% of the city’s pre-teen and newly teen girls thought he was worth seeing as well!!

WHY DIDN’T ANYONE WARN ME ABOUT THIS?

And When exactly did my little girl grow up and decide boys were cool? Where was I when that happened? So, suddenly I find myself in a concert auditorium surrounded by throngs of screaming (of the ear piercing variety), hormonal girls, swooning, panting and passing out. Amongst them…… my little girl…… *SOB* 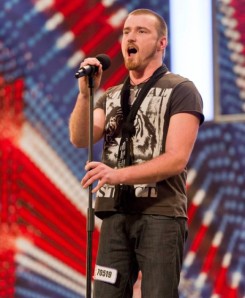 I sat watching these midget girls trying to throw themselves onto the stage, and seriously…. it was worse than the Michael Jackson Concert I went to back in 1997. Worse than the Tom Jones ones I have seen (ON TV!) where women throw their under wear at him…… They had to call security. Can you believe. Security when Ronan got himself on stage to sing!!!! All the girls rushed out of their seats, manners forgotten, knocking down everyone in their paths and catapulted themselves at the stage. All and sundry throwing plastic bracelets at him. Middle Child explains to me through googly eyes and breathless gasps that apparently he wore a bracelet at his first audition. Thank goodness he wasn’t wearing some gangster rapper, heavy, gold medallion round his neck eh? One of them would have surely rendered him unconscious! The long and short of it though, they had to radio for extra security to come out and clear the area and keep these girls off the stage. I can’t help but feel sorry for the actual winner….. no one’s really paying attention to him in this audience. I suppose he has copped off with th £100k prize but it must be hard to watch a 12 year old boy stealing all your limelight!

Despite all this though… the kid WAS truly amazing. He’ll definitely be something one day. You’re probably wondering where the award comes into all this. Well that happens at the end. Concerts that involve pre teen boys don’t end when the lights go out. I learned that tonight. So did middle child. As we sensibly left and were one of the first out, the newly teens came rushing past us like a herd of rampant donkeys knocking us flat to the floor with those ear-piercing screams again. As I dusted myself off I suddenly noticed Middle Child had taken off after them all down the street as well. Oh Hell! Where on earth was she going? Sprinting off behind her, shouting like a lunatic for her to come back right now, surrounded by a mass of more and more girls pushing and shoving past me, it dawned on me……. They’re heading for the flicking back exit aren’t they?! That’s the best bit isn’t it? Trying to catch the stars on their way out, autographs, photos, the chance of actually touching them…..  And it’s her night right? So I CAN’T end it now really can I? Noooooooooo, I have to do the right thing. I have to run….. run with all these hysterical oestrogen fuelled girls. I have to find the back exit….. I have to find MIDDLE CHILD! Where the hell was she? OMG! Is she flattened? Is she lost? Is she tired? It’s so late? And she must be hungry. My poor baby, does she even know where she’s really going? 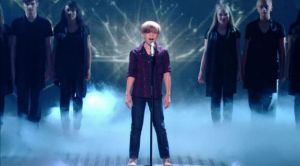 Oh… she’s fine it turns out! She knew where she was going alright! She’s round back….. pushing and shoving with the best of them trying to get a good view of these newly formed stars. I’m seriously having a good time watching her have a good time. Sadly though, Middle Child is short. Well built but short and there’s alot of girls there who I am sure are too old (and too tall) for this lovely Ronan. But he’s famous now and will probably be very rich one day. He’s the closest they’ll get to a Prince and since Kate’s recently bagged one, they all want one too right?!

So poor Middle Child is fancying her chances and she’s being pushed and shoved in all directions other than forward by all these older or bigger girls and unlike them, oddly, she’s displaying some level of courtesy to others. My fault I suppose. She know’s I’m there and knows I won’t tolerate rudeness so what do I do? I do what any mother would do. I bloody well get in there and start pushing for her, desperately trying to thrust myself through the crowd with her tucked safely behind me, arms round my waist but soon realising that there’s no respect for elders where Ronan is concerned from the throbbing mass of girls around us and not one of these walking hormones is going to let me get past.

Stage two of the plan you may wonder? Well, it’s obvious isn’t it? I put her on my shoulders! *DRUM ROLL*

Let me explain something here….. Middle Child may be short, but like I said. She’s well-built. She’s not over weight. She’s what I would describe as muscular or dense. In other words, she’s flippin’ heavy!!!! I’m rather envious of her body, when she stretches out, she’s going to be amazing, but in the mean time, I’m carrying this…. child that is, on my shoulders and neck.

Anyway, it feels more like I’m carrying my car on my neck. Add to the mix a city of girls pushing and shoving, Middle Child in her excitement grabbing onto my hair like it’s a pair of reigns and trying to guide me through the crowd, fingers in my eyes, my feet being stampeded on by everyone around me, desperately trying to keep my balance while I pass her my mobile phone she’s screaming for… she gets what she came for. 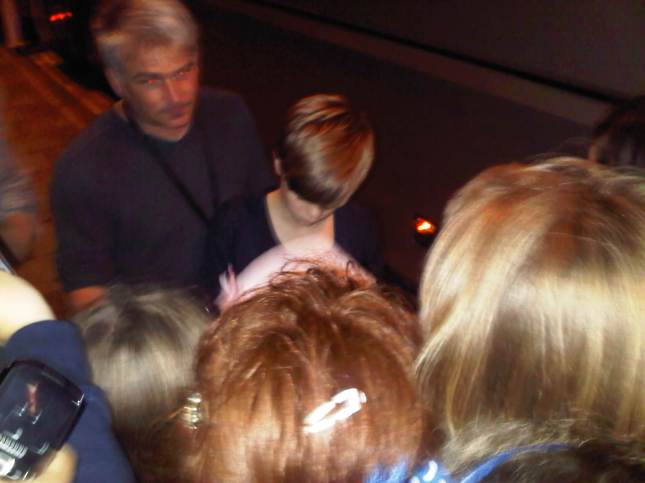 Twenty three herniated discs in my back later, blood (all over my feet), tears (from where she got elbowed in the face before I put her on my shoulders), she got it….. the photo to take to school and show off to the other girls. Here it is…. and was it worth it? Hell yeah! To see the smile on that girl’s face….. anything was worth that! Will I be doing it again any time soon? Um… no, maybe once a year if June 22 falls on a Saturday but I’d like my Mother of The Year Award for this year in the mean time thanks!